You are here: Home / About Ken MacGillivray

While a student at Dallas Theological Seminary, Ken volunteered to be an English language coach for international students. “I was working at an accounting firm and going to seminary,” Ken says. “I didn’t have a lot of time but thought, ‘We can eat lunch together and practice English.’” God had plans! Ken became friends with a number of international church leaders and the seeds of Partnership of Pastors International were planted.

As a New Testament major on the Christian Higher Education track, Ken did teaching internships at Criswell College in Dallas and Seteca Seminario Teologico in Guatemala. He graduated from Dallas Seminary with a Master of Theology degree in 1995. Ken worked at a Big Six accounting firm for nine years (before, during and after seminary), then pastored in the New York City metro and mid-Michigan for more than two decades.

After a “vision trip” to Haiti in 2010, he began leading pastors training there in 2011. Ken says, “In so many ways the Lord has prepared me all my life for this season of Kingdom work – my seminary training, pastoral and leadership experience in larger churches, and connection with international brothers and sisters, especially in Haiti.” In April 2019, he stepped out of his role as Associate Senior Pastor of Hopevale Church in Saginaw, Michigan, to formally establish Partnership of Pastors International, a nonprofit organization dedicated to encouraging, training and resourcing church leaders in Haiti and other developing countries. 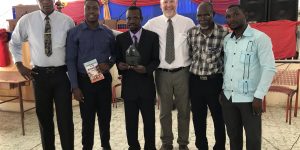 “Do you have an idea how many people PPI training reaches?” A PPI friend asked me this question recently. He was thinking not only of church leaders who take our courses, but people in their churches and beyond. It got me thinking – and excited! The short answer is, Only the Lord knows how many […] 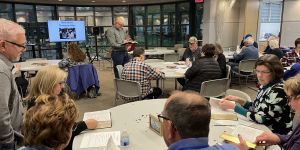 Rena and I first thought of hosting a PPI update event in 2019 just before COVID-19 closed down most gatherings of people. On May 3, 2022, we did it – with the support of PPI Board members and the Davidson’s Community Group! Rasanble is a Creole word that means “a gathering of people for a […] 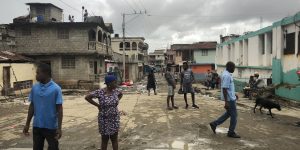 Haitian Christians need food right now, and we’re doing all we can to get it to them. You can help us provide nutritious nonperishable foods such as rice, black beans, corn meal, etc. by donating HERE. If anyone has material possessions and sees a brother or sister in need but has no pity on them, how […]

Esau Paulema, Co-Founder and Haiti Liaison We consider Pastor Esau the founder of Thompson Bible pastoral training in Haiti. In 2010, he asked us to return to Haiti to train pastors. Since then Esau has prayed and worked tirelessly to make every conference happen. He is a humble, … END_OF_DOCUMENT_TOKEN_TO_BE_REPLACED

“In so many ways the Lord has prepared me all my life for this season of Kingdom work . . .”  Read More »

Partnership of Pastors International​, a nonprofit organization committed to encouraging, equipping, and resourcing pastors and churches in developing countries.